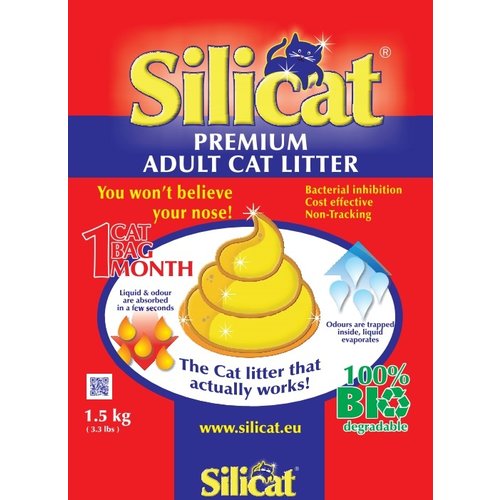 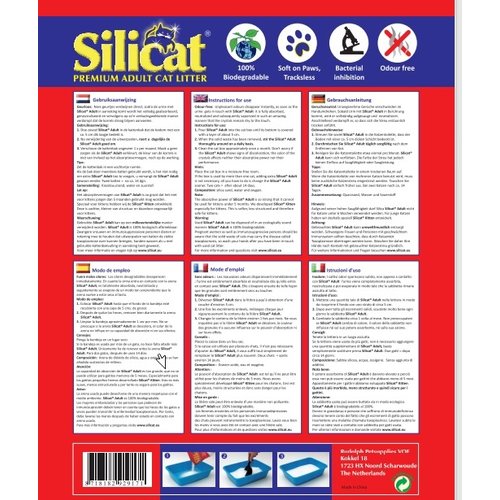 Silicat Adult Litter 1.5 kg
The Silicat Adult Litter in 1.5 kg is a highly absorbent cat litter that instantly removes odors. This cat litter grit is made from silica sand, which has many favorable properties. The stones ensure that urine is immediately absorbed, neutralized and evaporated. Odors are captured in the stones, so you won't be bothered by unpleasant odors anymore! Silicat also inhibits the development of bacteria and the material is soft on the paws: it does not stick to the coat and is therefore not taken out of the litter box by the cat. Because you only need to stir this litter grit once a day after removing faeces and the grains can absorb such large amounts of moisture, you only need to replace the grit once a month for one cat. They spend less time and money on changing the litter box. Silicat can also be disposed of in an environmentally friendly way: it is 100% biodegradable.
Note: do not use for cats younger than five months.

- Cat litter for cats older than five months
- On the basis of silica sand
- Highly absorbent, no moisture and odors
- Inhibits the growth of bacteria
- No scooping away lumps: just remove stools and stir the gravel
- No loss of grit, the litter box only needs to be changed once a month